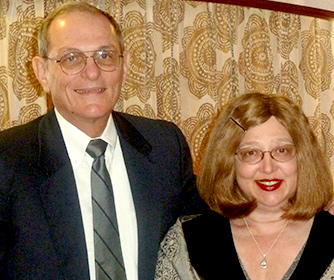 Although the acknowledged author of these novels is Michael H. Rubin, the books are, in fact, the result of the longtime collaborative effort of the husband and wife writing team of Mike and Ayan Rubin.

Their debut novel, THE COTTONCREST CURSE, is a historical thriller published by the award-winning LSU Press. Its story line takes place from the 1860’s through the 1960’s and follows the exploits and travails of several generations of five families who own, work, or reside near the eponymous South Louisiana plantation.  THE COTTONCREST CURSE garnered the Book of the Year Gold Award at an annual meeting of the American Library Association where it was named the top thriller/suspense novel published by a university or independent press. A German edition has been published by Suhrkamp and is for sale in Europe.

Their second novel, a contemporary legal thriller entitled CASHED OUT, is now in its second edition.  It won the coveted Jack Eadon award as the Best Contemporary Drama and was shortlisted for the Silver Falchion Award as the best thriller. Combining page-turning action with a distinct sense of southern locale, the Providence Journal raved that it features “a lawyer down and out enough to make John Grisham proud. He’s culled from the likes of Michael Connelly by way of James Lee Burke. A gem of a tale.”

A nationally known legal ethicist, public speaker and humorist, as well as a full time appellate attorney, Mike has had a varied career. He has been a professional jazz pianist in the New Orleans French Quarter, a radio and television announcer, and an adjunct law professor. He won the Burton Award for Outstanding Writing given at the Library of Congress and is a member of the Author’s Guild, the International Thriller Writers, the Mystery Writers of America, and the International Association of Crime Writers.

Ayan has had an equally varied career, having been a classroom teacher, an education administrator, a prolific grant writer, a developmental book editor, a nonprofit consultant, and, for almost three decades, the Coordinator of the Educational Services Division of Louisiana Public Broadcasting, a statewide television network, where she was responsible for initiating and then shepherding a wide variety of video projects from concept through script development and production to statewide and national broadcast.

Mike’s breadth of knowledge about the intricacies of the law and his penchant for devising dramatic situations, combined with Ayan’s unique ability to visualize and bring characters and scenes to life, make for taut tales with unrelenting twists and turns.

Because Mike’s full time legal career and numerous speaking engagements keep them hopping, they write early in the morning or late in the evening, often discussing plot lines and character development during their daily 4:30 a.m. power walks. They are just as apt to draft and revise chapters while sitting in airports or hotel rooms as they are to do so in their adjoining home offices.

Together, Mike and Ayan Rubin have developed a unique literary voice that has captivated devotees of their page-turning thrillers. They have just completed their third contemporary thriller, ENFLAMED.

HOW DO WE WRITE? OUTLINING IN REVERSE

Before we start writing, we’ve talked through the key characters and their motivations, and we know the beginning, middle, and end of the novel, although we don’t yet know all the subplots or minor characters. Part of the fun in writing is to see how these develop during the writing process.

Although we never begin with a written outline, we “outline in reverse.” In other words, once we write a chapter, we jot down general information concerning that chapter on a spreadsheet. As each new chapter is drafted, the essence of its contents gets added to the spreadsheet. This helps us in several ways.

First, it aids us in keeping continuity straight. Did characters say or do something in chapter 14 that is unintentionally at odds with what they said or did in chapter 3? Keeping an outline in reverse helps us avoid inadvertent continuity errors that can creep into a manuscript.

Second, a reverse outline is extremely useful in keeping time frames aligned, especially in a novel like THE COTTONCREST CURSE, where part of the story is set in the post-Reconstruction era and part in the 1960s, and in a thriller like CASHED OUT, where the protagonist races against the clock, evading life-threatening danger while attempting to both retrieve $4 million of his dead client’s cash and salvage his own reputation.

Third, a reverse outline is invaluable when you’re trying to locate something you wrote in a prior chapter so that you can properly reflect the foreshadowing you built in while composing earlier portions of the manuscript. Although computers can electronically search for words you used, they won’t help you find concepts you had introduced, plot points you had staked out, or twists and clues you had added. That’s where a reverse outline comes in handy.

Fourth, once a manuscript is finally completed and it’s time to write a synopsis, a reverse outline provides a quick way to review the entire storyline in detail.

We’ve found that the reverse outline method saves us from being straight-jacketed into a pre-ordained plot. We prefer not to spend time creating a detailed outline in advance because we do not want to tire of the story before we even start writing it. Likewise, employing the reverse outline method in conjunction with our intimate knowledge of the main characters and the primary arc of the novel before committing anything to the page lets the story and characters evolve as we write while simultaneously enabling us to see where we’ve been. It’s like having a back-up camera in a car that works in tandem with the rear-view mirror. You need to pay attention to what’s in front of you, but when you have to look backwards, it’s reassuring to know that you’re getting the clearest and broadest view possible.

A nationally known legal ethicist, public speaker and humorist, as well as a full time appellate attorney,
Mike has had a varied career.